In the eighteenth century, Ballymena was quite a small town. It got its name from the Gaelic, Ballymenagh, meaning the ‘middle town’ as it was situated mid-way between the villages of Broughshane and Galgorm. As a result of the industrial revolution of the nineteenth century, mills driven by water power were built on the Braidwater River and the linen weaving industry transferred from the rural cottages to these new mills. People began to move from the rural areas to find employment in the mills.

Prior to this movement of population, the Catholics of the area were confined to the rural districts. The penal laws which followed on from the Reformation had dispossessed Catholics of their Churches, and the Mass was outlawed. Nevertheless the people still continued to practice their faith and have religious worship. Sites of various Mass Rocks are still scattered throughout the area. In the townland of Crebilly in a field named the Priest’s Plain, at Kate’s Hill in the townland of Dunnyvadden – here a little Mass bell was found – , in the Fort of Deerfin and in a place called Coll’s Acre where a Father Coll McQuillan was said to have celebrated Mass. The best known Mass Rock can be found at Boydstown Rock in the townland of Caugherty. 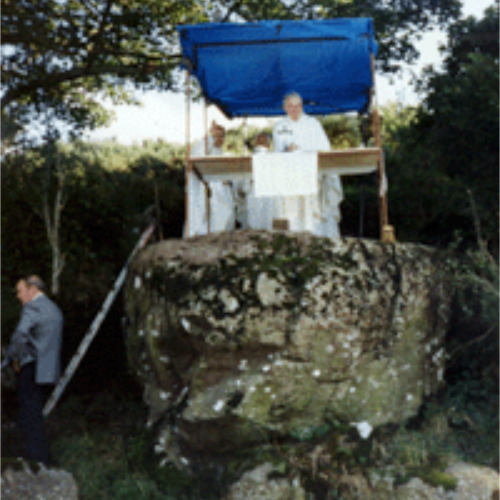 Here Mass was celebrated on Ascension Thursday, 7 June 1798, the day of the Battle of Antrim. It’s said that some of the worshippers attended Mass and then went to the battle.

In September 1999, as part of the Parish Jubilee Year preparations, about four hundred people gathered for a Mass at the Caugherty Mass Rock. 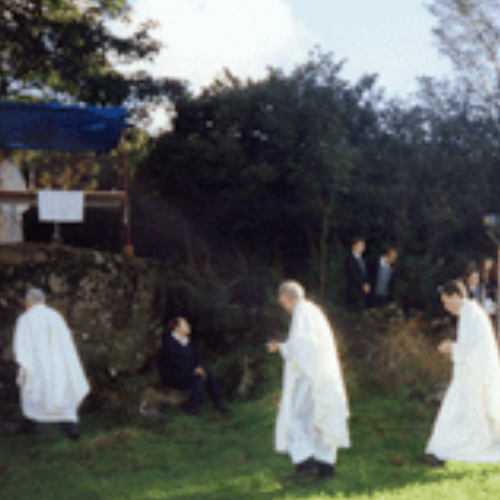 In 1755, a Father Devlin had a Church built in the townland of Dunnyvadden. It was a thatched building and it is a tribute to the masons who built it that the stonework of the gable walls (a combination of sand, lime and animal blood) is still perfectly preserved.

With great vision and unbounded confidence in the future, Father Lynch turned his energies to replacing the Church on the Clough Road. On 11 November 1860, the present Gothic Church known as All Saints, was dedicated by Dr Denvir.

It must have been used for some years before its official dedication because, during restoration work on the sanctuary ceiling frescoes in October 1999, the names of three painters were uncovered and the date October 1857.

The year following the Church dedication, a school for boys was opened beside the new Church. It had four classrooms. Ten years later in 1871, Father Lynch purchased a tenement in Broughshane on which he erected cottages, one of which was to serve as a schoolroom and a temporary Chapel. Father Lynch died on 4 August 1889.

His successor, Father Alexander McMullan, a noted theologian of his time, had the present Bell Tower completed, and a magnificent bell weighing thirty seven hundred-weight, installed. The bell had the inscription ‘Peace and prosperity to Ballymena’. It is rung manually every day.

Father McMullan was responsible for the stone wall and iron railings which surround the Church and the front gates and pillars. In the interior of the Church he erected two new side altars, the sanctuary lamp, the old Stations of the Cross and some of the stained glass windows.

At that time the curates of the parish had been boarding in private houses in the town. To remedy this Father McMullan added a new wing to the Parochial House to provide accommodation for them. He also built the teacher’s residence on the Cushendall Road.

Father McMullan became the Vicar General of the Diocese. He died on 13 October 1908 and is buried in Crebilly where a Celtic Cross marks his grave. The Sacred Heart Altar was erected by the ladies of the parish in his memory. 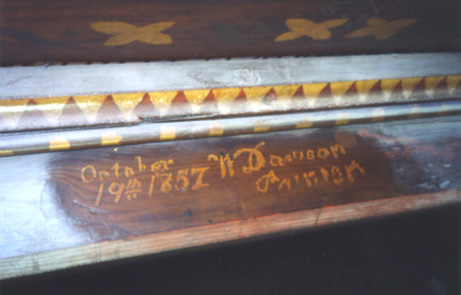 He then turned his attention to the Church where he extended the Sacristy, installed the heating system, marble pulpit and Communion rails, mosaic floor in the Sanctuary and the marble baptismal font.

In 1923 Canon O’Donnell bought Kintullagh on the Cullybackey Road. The property was the residence of the Young family and had come on to the market for £5,325. At his invitation, two Sisters of St Louis, from the Mother House in Monaghan, came to live there in September 1924. It was a rather noteworthy coincidence that the pillars at the entrance to Kintullagh were decorated with the Fleur-de-lys, the emblem of St Louis’ standard. Dieu le veult! (As God wills)

More information on the St Louis Sisters who had been in Ballymena can be found here.

The sisters taught in the school for boys and girls on the Cushendall Road while renovations were carried out to existing buildings beside their new convent premises.

On 1 April 1925 an Elementary School for girls was opened at Kintullagh – the girls coming from the schools at Harryville Bridge and Cushendall Road.

The school at Harryville Bridge was closed and the boys from it transferred to All Saints’ Boys on the Cushendall Road.

The Sisters of St Louis opened a Grammar School for girls at Kintullagh in September 1924 with an enrolment of thirty six students.

Canon O’Donnell also made provision for the social activities of the parish with the erection of a magnificent two storey Parochial Hall which opened in 1925. It cost £10,000, almost £6,500 of this was raised at a huge parish bazaar. A special booklet was produced to mark this occasion. The Parochial Hall occupied a prominent site at the junction of Market Road and Cushendall Road. This hall was burned down in a fire in 1987.

In 1929 the local paper reported ‘All Saints’ Church was filled by a congregation which included worshippers from Belfast and other centres when a charity sermon was preached to defray the cost of a new organ, installed through the efforts of Very Reverend Canon O’Donnell PP VG, who had the unselfish assistance of his curates – Reverend JJ Greene and the Rev W Kirkwood.

The generous contributions of his flock and friends outside the parish enabled the venerable and revered Pastor to declare the organ opened free of debt.

The choir which had been specially trained by the Sisters of St Louis, Ballymena, one of whom presided at the organ, treated the music with conspicuous impressiveness.

The tone of the organ has the mellow quality for which Messrs Evans & Barr Ltd, Belfast – the builders had gained an enviable reputation’.

Many people from the parish travelled by bus to the Thirty-first Eucharistic Congress which was being held in Dublin in 1932. Sadly they came under attack as they made their way to the station.

For more information on the Eucharistic Congress click here.

Canon O’Donnell died on 20 December 1941 and was interred in the grounds of All Saints’ Church.

Canon John McLister was appointed to Ballymena on 1 February 1942. He had been a curate in Ballymena parish from 1911 to 1917. He found on his arrival that the Parochial Hall had been requisitioned by the Military from 8 July 1940. It was de-requisitioned in 1943. The Church needed attention, but owing to war time restrictions, work was unable to commence until 1945. The improvements included re-roofing, replastering the interior walls, having the entire Sanctuary walls done in mosaic, and building a Mortuary Chapel. Also the clear story windows were reglazed in leaded lights with Cathedral glass and the aisles laid in terrazzo.

Mr Patrick Murphy, a prominent parishioner who served as Mayor of Ballymena 1946-47, was made a Knight Commander of the Order of St Gregory.  This is the highest papal honour that can be bestowed upon a layman.

The next big development in Ballymena came in the 1950’s when house building and a new spate of industrial development began after the Second World War. The arrival of Gallahers’ Tobacco Factory at Galgorm and the Michelin Tyre Factory on the Broughshane Road brought many people to Ballymena. New housing estates were built between the Cushendall and Doury Roads. On the Harryville side of town two large housing estates were built at Ballykeel and more were proposed for the Antrim Road and Ballee area.

Increased numbers of children were attending the girls’ primary school at the Convent and Canon McLister decided that a new school was vital.

A new Grammar School was also necessary. His Lordship, the Most Reverend Dr Mageean laid the foundation stone on 10 June 1953 and at the opening ceremony on 24 May 1954 his Lordship paid tribute to Reverend Mother Laurentia.

Fr Peyton’s Rosary Crusade was held in Ireland in 1954 and on 17 June His Lordship the Most Reverend Dr Mageean came to Ballymena with Fr Peyton. Fifteen thousand people from North and Mid Antrim attended the Crusade which was held at Hugomont. For more information click here.

Changes were also taking place in the Education System with the introduction of what was then called Intermediate Schools. To meet this requirement in Ballymena, Canon McLister purchased nineteen and a half acres of the Hugomont Estate, including the Hugomont Mansion, on the Broughshane Road for £7,533. He laid the foundation stone for St Patrick’s Intermediate School on 14 August 1956. The school was planned to accommodate three hundred and fifty pupils and was to cater for children from Ballymena, Glenravel, Braid and certain areas from Ahoghill, Dunloy and Loughguile.

After preliminary excavations it was found that the original site was unsuitable. Work ceased on 22 January 1957 and restarted on 3 August 1957. The school had to be resited further back from the road and at a higher level.

Canon McLister died suddenly on 6 January 1958 having celebrated the first mass at 6 30 am. He was buried in the Church grounds beside his predecessor, the late Canon O’Donnell.

Father McGrattan was appointed to the Parish on 1 February 1958. He was responsible for having All Saints’ Church rewired. New carpets, incorporating a celtic design with sacred symbols interwoven were purchased for the High Altar, the two side altars and St Joseph’s altar in the Mortuary Chapel.

His biggest task was to complete the new Intermediate School, now known as St Patrick’s College, on the Broughshane Road. The school was opened and solemnly blessed by His Lordship, the Most Reverend Dr Mageean on 8 September 1959.

In October of this year, 1958, the Parish Priest, Fr McGrattan, was appointed to the Diocesan Chapter by His Lordship the Bishop – a mark of the recognition for his long service to the Diocese.