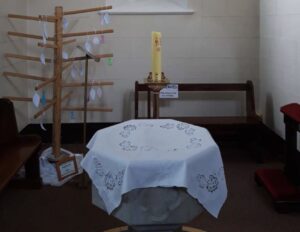 John the Baptist spent his life reminding people that they are sinful and weak and need to repent.  In today’s gospel he tells them that God has a further plan, not just to save us from sin but to give us the fullness of eternal life through his Son Jesus Christ who has the Father’s approval for all that he does. “You are my Son the Beloved” says the divine voice from heaven.  So keep in touch with Jesus: be vigilant about sin and live in God’s grace.

I want to illustrate the two-fold message from a novel written in Ireland about 130 years ago.  The novel is about Shianna a man who is tricked into making a pact with the devil in order to escape poverty.  There was a real spark of decency in Shianna as he wants to be a good friend to others but the devil exploits his weaknesses to lead him astray.  At the end of the book there is a dramatic showdown between the devil and Shianna.  The devil is coming to claim Shianna’s soul which he thinks he has bought completely, but it is not as cut and dry as he expected.  Shianna’s faith is not completely gone as he has been responsive to other good influences.  There will be a surprise for the devil. During their conversation, the devil tells Shianna how he works.  “I do not go for a big show.  I work subtly.  The best results that I get is when I get two friends to lead each other astray.”  Everybody has weaknesses, the devil says, and if I persuade people to follow their own inclinations totally, they will inevitably suit themselves despite their noblest  intentions and despite their good qualities.  When temptation comes, they will give in as they are thinking only of themselves.  They will use any excuse to change the rules to do what is most convenient for self and for the one they like the best. Each person will bend the rules in order to please the one he or she likes the most.  Once you get a couple started on the way down, they will finally fall; and what a fall it will be.  They will lead so many others astray.  It’s been the same all throughout history boasts the devil.  Is this true today?

Sure enough I read an article in the Irish Times about a famous journalist who left her own family to go away with her lover who himself left his own wife and family.  They were famous and in the public eye.  They lived a wild lifestyle yet were acclaimed because of their talent and energy, and because the public loves a scandal and because the Irish media too often gives prominence to unconventional notorious behaviour.  But we know they had many regrets because one of them wrote, “we knew we were causing heartache and pain to our closest family but the desire and excitement took over.  I often wonder if it could have been different.” That’s the very point made in the story from one hundred years ago. Identify someone’s weakness, work on it, and you will have a chance of bringing them to behave at the lowest level. They will use intelligence, influence and money to eat drink and be merry, at whatever cost.  Is there any hope?

What happened finally in the story book? The devil is anxious because on one occasion he had allowed Shianna to escape his attention and a good friend came to Shianna’s help to call him back to the right path; the very one he had helped personally long ago in his early years.  She was watching over him and not for selfish reasons.  She wanted the best for him and it transpired he wanted the best for her. Did this female figure represent the Catholic Church or Mary or was she an actual female friend who advised him for his own good?  Shianna always felt he could not get happiness or success all by himself, by his own efforts, not even in a passionate relationship.  He did find salvation from a person who befriended him out of unselfish concern.  We are blessed when the Church and Our Lady and good friends watch over us for our own good.  These true friends point out good and bad qualities and help us to grow by discipline and training.  We then discover the mercy and help of God who comes if only we ask.  Shianna asked for help and his prayer was received. In the end he thwarted the devil by deciding for what was good and right. May we be directed, just as John the Baptist prayed, to the powerful, Spirit-filled, Son of God who will truly lead us to the fullness of life. 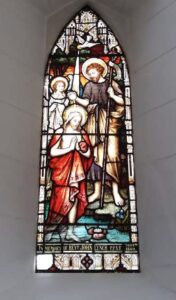